Cracking the code of the Christmas Nutcracker Film 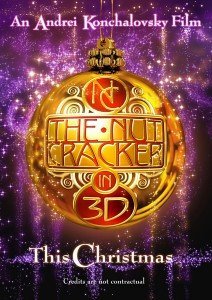 This week I was reminded of the time I spent cracking the code which the Russian director set in his Christmas film The Nutcracker in 3D.Â  I figured that if the blogging fairy had sent me two subliminal messages in a day for the subject of my next post, then who was I to ignore her spell?

I was doing a bit of filing (ah the glamour!) and found some forms which I needed to deal with. When musicians are booked for a session for a film or backing vocals, we have to fill in either a MU or Equity form to release the rights to our performance. It used to be just for the recording but now it can extend to Interactive, Backing Track, Music Video and Film Rights. (I touched on this practice in the final paragraph of my second Blog about Susan Boyle ). There is a body called PPL which collects royalties from radio airplay. If you register your performance there, then they collect the small amounts of money that radio stations pay to use those recordings. When you’ve done as many recordings as my colleagues and I have, this can mount up to a small regular payment not to be sniffed at. (Hey – us musicians will take whatever we can get). I was looking through the file to see which forms I hadn’t yet submitted to the PPL website and was reminded that I had done a lot of solo sessions for a film based on the music of the Nutcracker. 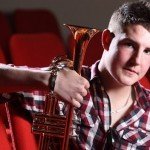 Later on that evening, I was watching a Channel 4 programme called Orchestra United. It’s about the HallÃ© trying to put together a new youth orchestra in Manchester. They auditioned talented youngsters from all sections of society (playing all styles of music) that wouldn’t normally have the chance to be involved in an orchestra. The conductor made the point that music lessons and instruments cost a lot. With budget cuts and the dwindling of music tuition in our schools, the chance to become a classical musician is quickly being confined to the wealthy. There’s also a trend towards teaching pop and ethnic music which is replacing traditional methods. In the picture is the talented young trumpeter who is portrayed as the bad boy of the very naughty brass section – he’s on the verge of getting the sack all through the second episode.

As with all these reality programmes, (Boys Don’t Sing, The Choir, Gareth Malone goes to Glyndebourne) it’s edited in such a way as to make you think that the participants are DREADFUL. Surprise, surprise – by the end of the episode everything miraculously comes together and they’re not half bad……I know it’s a bit obvious but it works for me every time. I love a good ‘bad boy turns good’ story.

But I digress (in the manner of Ronnie Corbett). One of the pieces the youth orchestra slaughtered in the early rehearsal was Tchaikovsky’s Waltz of the Flowers taken from his Nutcracker Ballet……spooky!

In September 2007 I was asked to record a guide track for a new big-budget film. I was told it was for an actress to sing along to whilst filming. The film had a working title of The Nutcracker, The Untold Story and was by directed by Russian, Andrey Kontralovskiy (famous for films as diverse as Duet for One and Tango and Cash). The actress Yuliya Vysotkaya (who is coincidentally the director’s wife) had a mezzo voice and was having singing lessons so that she could sing along convincingly to my guide track. I was told that later on they would get a famous opera singer to replace my guide vocals for the final soundtrack. I turned up at Air Edel Studios, a small but very successful recording studio in London’s West End. It was only me, the studio engineer and the musical director Terry Davies. (Terry won an Olivier Award for his music for Play Without Words). 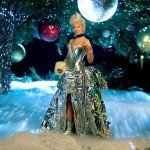 Tim Rice had written lyrics to Tchaikovsky’s Dance of the Flowers and it was now called ‘A Special Power’. The character was the Fairy Godmother. In the film, the children’s mother turns into the Fairy Godmother. Apart from that information, we were didn’t have much to go on. The director hadn’t been very clear about the vocal sound he wanted. I could hear a bit of the dialogue just prior to where I had to sing. As the original plan was that an opera singer would replace my vocals, we did a take where I sang with a traditional operatic sound. We then tried a few different approaches, eventually doing one where I sang in a style that I thought would match with the speaking voice better – much more intimate. I filled in my MU form and set off home, hoping I’d delivered something that would satisfy the director.

I then got a call from the fixer about three weeks later, saying they wanted me to go back. Nothing was wrong, they just had some alterations. Terry (the MD) told me they liked the sound of the final take and had a few word changes. Could I sing the whole song with the changes and match the particular sound that the director had liked? I did that, filled in the form and went home thinking it would be the last time I would be needed.

I did wonder at the time if, when the Director got used to hearing my version over and over again during filming, he would decide to keep my voice…..

In September of 2008, I got another call asking me to go back. In the year between sessions, the voice of the Russian actress had been dubbed over by an American voice for the American version of the film. As I had hoped – the director had decided to keep my voice on the soundtrack.Â  The studio had hired a professional language coach to ensure that I sang the same song with the correct American accent to match the new dialogue. It was a very specific accentÂ  – a bit like Gina Davis who is from Massachusetts. So, I did my best to sing it again – in the right style, with the right accent and the right sound to match the new voice. The producer seemed pleased and off I went home again.

Five days later I was called back – some work had been done to edit the film and the original orchestral track and my singing didn’t exactly match up with the mouth of actress on the picture. Obviously it was too expensive to re-record the orchestra, so my task was to sing whilst watching the film and match my singing to her mouth. I had to make it sound natural, like I was being a little free with the rhythm in my interpretation. It was quite a difficult thing to do but after a few takes the people in the production box seemed happy.

Time has passed and, to be honest as I’ve never seen a trailer for it, I’d forgotten all about the film. When I saw the MU forms, I did a bit of research online and found out that the total budget for the film was ninety million dollars! It was was filmed in 3D and still hasn’t been released in the UK – the estimated release date is Christmas 2010. That’s over four years since I did the first session and filming had been going on for quite a while in 2007.

I did find a promotional video for the film which stars child actress Elle Fanning alongside a cast including John Turturro, Francis de la Tour, Nathan Lane and Richard E. Grant.

Unfortunately when I logged onto the performer’s section of the PPL website to update my claims,Â  I discovered the registration section is down for the next month for maintenance. My attempts at organisation were thwarted after all.

This month has been a frustrating time for diary clashes, culminating in Murphy’s Law making me kiss goodbye …

on Cracking the code of the Christmas Nutcracker Film.