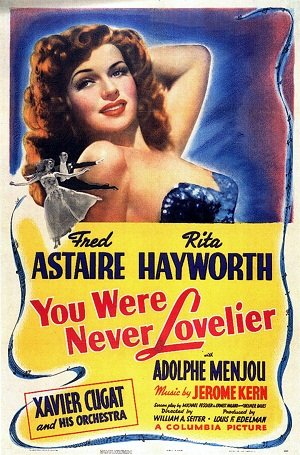 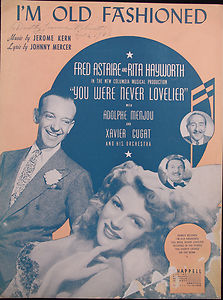 I’m Old Fashioned was written in 1942 by Jerome Kern with lyrics by Jonny Mercer for the Columbia Pictures film, You Were Never Lovelier.

The words are quite charming and I particularly love the final stanza:

I first came across the song on a CD of the same name, recorded by one of my favourite soprano voices, Margareta Bengtson. I met her many years ago in Sweden, when she was the high soprano of the Swedish a cappella quintet, The Real Group and I was the low alto of The Swingle Singers. Margareta’s soprano voice has an extraordinary quality which sounds both innocent and sensual………

She begins the song (and the album) unaccompanied and then gradually they add a wonderful big band accompaniment. I start the same way on my recording, a perfect fourth lower (although our version is just voice and piano). I credit her version on the sleeve notes of my album as the inspiration for the unaccompanied start.

I’m Old Fashioned was sung by Rita Hayworth’s character in the film You Were Never Lovelier before a dance sequence with Fred Astaire. It was the last time the couple were paired together. Hayworth reputedly had quite a fine singing voice, but in this film (and most others), her singing voice was dubbed on by Nan Wynn.

Fred Astaire wrote about the first time he met Rita Hayworth, in his autobiography Steps In Time:

“My first meeting with Rita was in a rehearsal hall at Columbia Studios. It was upstairs in one of the buildings and, as I recall, the stairway led directly into the large rehearsal room. As I came up the last few steps I gave a hurried glance around, expecting to see Rita, as I had been told she would be there. I didn’t see her and asked one of the assistants, “Isn’t Miss Hayworth going to be here this morning?” he pointed to a remote corner of the room, “Why, yes…..she’s been here for some time.”
There she was. Oh yes – a beautiful sight.
Bob Alton, choreographer on the picture, brought her over and introduced us. I said, “I’m an old friend of your father’s.”

I then asked how tall she was as I stood alongside of her….As we stood there, both in flat heels, I was easily three inches taller and I told her I hoped she didn’t have to wear very high heels with me. She quickly answered,

We then danced around the mirrored room in impromptu ballroom fashion, as I wanted to get an idea of how we looked together.
I kept thinking how extraordinary it was to find myself about to play opposite my freind Eduardo Cansino’s lovely daughter, and I told her so. She laughed.
Rita danced with trained perfection and individuality. She, of course, knew through experience what this dancing business was all about. That was apparent the moment I started working with her.”

Rita resented the studio for never letting her sing on film or helping her to train her voice. She complained: “I wanted to study singing, but Harry Cohn kept saying, ‘Who needs it?’ and the studio wouldn’t pay for it. They had me so intimidated that I couldn’t have done it anyway. They always said, ‘Oh, no, we can’t let you do it. There’s no time for that, it has to be done right now!’ I was under contract, and that was it.”

Here’s a clip of Fred Astaire dancing with Jane Russell in her heyday with the voice of Nan Wynn singing I’m Old Fashioned.

Nan Wynn was a very interesting singer who earned the nickname “molten mama with the lava larynx”.  Her father owned a department store in Wheeling, and the family often visited New York.  When she was only sixteen, a retired producer who was staying at the same hotel as the family, heard Nan singing. He booked her to sing at a vaudeville house in Peekskill, and the owner went on to engage her to sing at his other two establishments. Like a lot of good singers of the time, she honed her craft working as a big band singer and appeared on radio shows like the Hal Kemp Orchestra’s Time To Shine show. She appeared in films such as Million Dollar Baby (1941) often as a nightclub singer. Nan eventually stepped out of the background when she got a starring role opposite William Lundigan in the 1941 film A Shot in the Dark. 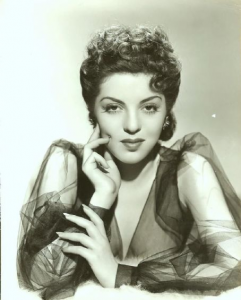 Her career was tragically cut short in 1949 when she contracted cancer and the surgery to remove a tumor severed a facial nerve and caused her to lose her voice. Nan was very determined and despite medical opinion to the contrary, she regained her speech and facial control by 1955, at which point she was briefly signed to RCA Victor. In 1959 she became involved in the State Cancer Crusade and appeared at the American Cancer Society events for several years.

Rita Hayworth also had a struggle towards the end of her life when her Alzheimer’s disease was mis-diagnosed as alcoholism. She had a history of heavy drinking which confused things. Her daughter Princess Yasmin Aga Khan (her daughter by her third husband Prince Aly Khan) said:

“It was the outbursts. She’d fly into a rage. I can’t tell you. I thought it was alcoholism-alcoholic dementia. We all thought that. The papers picked that up, of course. You can’t imagine the relief just in getting a diagnosis. We had a name at last, Alzheimer’s! Of course, that didn’t really come until the last seven or eight years. She wasn’t diagnosed as having Alzheimer’s until 1980. There were two decades of hell before that.”

In July 1981, An LA Supreme Court Judge ruled that Rita had to be cared for by her daughter, who bought a flat next door to her in New York, where she arranged the care for her mother throughout her final years. Yasmin went on to become the president of Alzheimer Disease International.

Update 19/10/18
Because of the link above to ADI, I was recently contacted by Oliver Clark who has written a very interesting article outlining the long-term effects of alcohol on the brain. It includes a very clear infographic/graphic image that certainly gave me pause for thought!
You can read that aricle HERE

In 1942 when Kern and Mercer wrote I’m Old Fashioned, Johnny Mercer also wrote the lyrics for That Old Black Magic with his long time collaborator Harold Arlen and one of my favourite songs, Skylark with Hoagy Carmichael.

I came across a very interesting documentary made by Clint Eastwood on YouTube, which celebrates the life of Johnny Mercer and is well worth watching.

Johnny Mercer was born in Savannah, Georgia and I was lucky enough to sing with the Savannah Symphony Orchestra when I was touring with the Swingle Singers. (Now, sadly, I discover that the orchestra has gone the way of so many and folded due to financial troubles.)

I remember we sang an arrangement of his most famous song, Moon River, but what I remember most, was that we were all suffering badly from jet-lag. In between the rehearsal and the show, I decided to take a nap. Somehow, I got am and pm mixed up on my alarm clock and woke from my deep sleep just in time to realize that it was only half an hour until the start of the concert. I had to throw on my dinner-jacket-trouser suit, (both the girls and the boys wore the same first half outfits at the time) slap on some red lipstick and rush down the street in the steamy, southern heat. I arrived at the concert hall very hot and flustered as the orchestra were actually playing their first number. The rest of the group were panicking and wondering where I was. All a bit too close for comfort!

Johnny Mercer recalled how the older Jerome Kern reacted to the lyrics for I’m Old Fashioned: “We hit it off right away. I was in such awe of him, I think he must have sensed that. He was very kind to me, treated me more like a son than a collaborator. And when he thought I had a great lyric he said, ‘Eva, Eva, come down here’, and he kissed me on the cheek and he said, ‘Eva, I want you to hear this lyric’. Well, of course I was thrilled that he liked it that much, you know. ‘I’m Old Fashioned’, that one was.” (Eva was Jerome Kern’s wife for thirty five years until he died in 1945)

To listen to a clip of my version of I’m Old Fashioned (and the other thirteen songs) just click HERE.

I’ll leave you with one of my favourite singers, Tony Bennett, singing I’m Old Fashioned accompanied by Bill Charlap on Elvis Costello’s New Year’s Eve show in 2008.  Watch out for the moment at 0:50 minutes, when Bennett gestures to Bill and he plays a bell like chord to mirror Tony’s emphasis of the the word ‘sings’. Class!