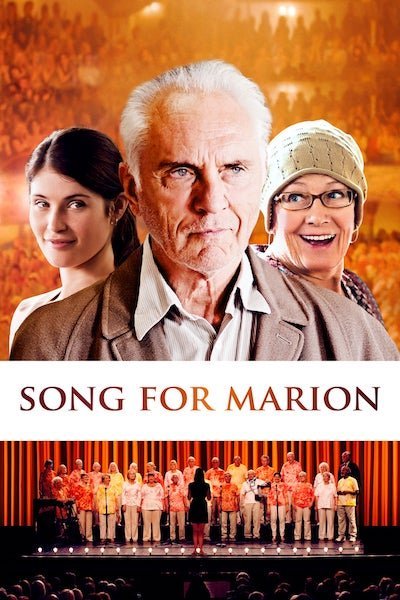 Today I heard a quote which really struck home: “It is never too late to be what we might have been”

It was attributed to George Eliot but when I looked it up online I found an excellent bit of research by Mr Alex Measday. He surmised that although it was commonly attributed to Eliot, it is in fact is a paraphrase of a conversation from the novel John Halifax, Gentleman written by Dinah Maria (Mulock) Craik (1826-1887).

“You mean, Mr. Halifax, what I might have been. Now it is too late.”

“There is no such word as ‘too late,’ in the wide world — nay, not in the universe. What! shall we, whose atom of time is but a fragment out of an ever-present eternity — shall we, so long as we live, or even at our life’s ending, dare to cry out to the Eternal One, ‘It is too late!”

The quote seemed very timely, as last week, just as I was about to set out on my bike ride along the seafront, I was called up by a session fixer and asked if I could travel to Newcastle in the North East of England. He had been asked to ‘fix’ five singers to assist a choir of senior citizens to record an album called Song for Marion. We would each sit within our voice parts and help with pitch, rhythm and accuracy.

The soprano and bass are a married couple that had both sung in the Swingle Singers just prior to me joining – and were old friends. I asked who the other singers were and the fixer confessed that, not to put too fine a point on it, we were chosen because we could all sing in different styles but also because we were: “there’s no way to put this delicately – because you’re older!” he blurted out.

Apparently the choir didn’t want a group of ‘twentysomethings’ turning up and telling them what to do.

This question of age crops up quite a lot when you’re a singer. I am somewhat lucky that I am an alto. It seems you have a slightly longer shelf life than sopranos. This isn’t of course anything to do with vocal ability, it just seems to be a fact. I did a concert with the Monteverdi Choir in London at Christmas where we suddenly realised that the oldest soprano was twenty seven!

The ‘Song For Marion Singers’ were booked on the 07:00 train from King’s Cross and would arrive about 10.00 to start recording at 11:00. We were to stay for two days to sing for two three hour sessions each day. I went up to stay with my friends in London the night before, as such an early train would be impossible form Brighton. On the journey we speculated what the project would be – I suggested an album in memory of a former choir member called Marion, perhaps paid for by her family – we had no idea really.

When we arrived at Newcastle station, we walked up the Hill to the  Assembly Rooms in Fenkle Street. It was an impressive Georgian building built in 1776, which is now run as a conference and function venue.

As we climbed the stairs (actually I took my case in the disabled lift) we could hear a choir rehearsing the Cyndi Lauper song, True Colours. We dropped our bags off and picked up our copies of the song arrangements and sat down for a reviving coffee. I was already flagging a bit after the early start and three hours on the train. The girl who met us explained that this was a choir made up of some actors but mostly local singers that had been chosen by audition. They had already been rehearsing together for a few weeks. The choir was to feature in a new film called A Song For Marion.

We would be recording some songs which would be used as ‘pre-records’. There was also a tricky five part arrangement of a Billy Joel song which they wanted us to sing, one to a part, to use as a learning guide for the choir. This was not quite what we had been booked for and if the recordings were used on the film it should have been a different hourly rate. It’s always a bit awkward when you turn up and things are different from what you were originally told. We didn’t want to make a fuss and alienate ourselves at the start so we agreed amongst ourselves to email our fixer to tell him. We would carry on with the recording and hope he could clarify things with the company who had given him the job. 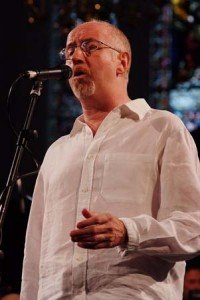 Just then, the choir stopped rehearsing and came in for a tea break and we met the Conductor Richard Scott. Richard had been ‘discovered’ by the film production team when he conducted the Jazz Festival Choir at the Sage, Gateshead. It turns out that the Sage has a whole host of music activities for the over 50s called their Silver Programme. Richard had been leading a scratch choir created in only one day. The advert for the workshop had read:

Following on from the popularity of our massed singing projects of the last few years, this choir will be led by Richard Scott. The four-part scratch ensemble will learn a range of pieces drawn from core jazz repertoire; including material from the ‘Great American Songbook’, Ellington and other jazz greats. Bring your love of singing and enthusiasm for learning quickly; sheet music provided and you can also learn by ear. You’ll perform on the Concourse on Sunday evening, before Cleo Laine’s concert – an unmissable opportunity. Richard Scott, an inspirational vocal leader, is one of the North East’s best kept secrets, both as a vocal/instrumentalist and choral director.”

The producer told us how they had been so impressed with the way he worked with the choir that they approached him then and there – just goes to show that you never know who’s in the audience! 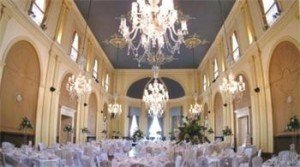 We went through to the Main Banqueting Hall resplendent with chandeliers. As we started recording, you could see why this talented and charismatic man had been asked to prepare the choir and vocal arrangements for the film. He also turned out to have a great voice, demonstrating all the harmonies at pitch! Here’s a youtube video of a song from that performance featuring some of our choir. (One choir member took great delight in telling me how impressed her grandchildren were to see Nanna was on “the youtube”!) Here’s the choir in action on The Youtube

The first song we recorded was by Motorhead (!) and the “guest singers” (as we became known as) had a set of headphones with a guide track playing. Our job (in tandem with Richard’s conducting) was to keep the pitch and rhythm together with the backing – quite tricky as the choir members were singing with no guide and were asked to use our voices as their guide. We all worked really hard and Richard was so good at motivating us that we sang for over two and a quarter hours without a break! I only noticed the time when my voice rebelled and I had to stifle a painful cough which made my eyes water. I had to stop singing for a page before I recovered. Cross with myself, as I was supposed to be the professional, I looked at my watch and realised that I had been so engrossed, that I hadn’t had a drink for all that time. I was also singing very strongly in ‘rocky’ chest voice to try and lead ‘team alto’. In the break, I decided I needed to pace myself a bit more if I was going to get through the two days. Richard also announced after tea that if anybody felt ill or faint during the day, they should just sit down immediately – never mind the recording. Maybe I wasn’t the only one feeling tired. 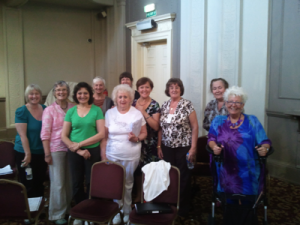 During the sessions I got to know my lovely altos and we all agreed we made a great team. Here they are at the end of the two days – still full of beans. Each person had a great story to tell – how they got involved in the film and of course, some wonderful anecdotes from their lives. One lady told me about the day she rode round Ayres Rock on a Harley Davidson (“you didn’t need a helmet in those days”). It was clear that they all had a great sense of fun and tremendous energy. There was an announcement from the production team at the end of the first day that  ‘Wardrobe and Make-Up’ would visit at the end of that week. They were worried that the singers looked too young and nobody was to dye their hair before filming! One very dapper gentleman confided in me that he was 84.

I work with people of all ages – the orchestral musicians especially, range from 20 to 70 and beyond. They all have a spark that I believe comes from being creative, which makes them ageless. A good friend of mine recently confessed she was 73.  I always thought she was in her early sixties and then I’d only guessed that from the riotous stories she tells about her early days as a musician and composer. I was completely amazed as she has far more energy than me most days. She certainly never tires of endeavoring to make herself a better musician.

Back in Newcastle we recorded an unlikely and riotous choice of songs. I won’t spoil the surprise – you’ll have to see the film. We had been told about some of the exciting cast members but were asked to keep it under wraps until the press release on the following Friday:

I was quite sad to say goodbye. The choir members were to start filming the following week and our pre-records were to be played on set. This was so that the choir didn’t have to keep singing over and over. They would play it while they worked on their choreography and the Film Crew would get their technical things sorted. The Choir would then record the singing live.

The Producer sent a lovely email to the fixer saying how helpful and efficient we had been. He assured him that, if any of the recordings were used then we would be paid the difference. There was also a possibility of further sessions after the filming was complete – fingers crossed.

Maybe we’ll get a ticket to the premiere!

These wonderful ‘seniors citizens’ taught me a lesson – they had gone out and got involved in music making and ended up starring in a movie. It just shows you: “It is never too late to be what we might have been” ……. or words to that effect……

My hope is that as my vintage matures, I will become a better jazz singer – I can certainly sing the blues with some conviction. When my vocal tone becomes less than pure and I develop a world weary, ravaged edge, look out!

I’m certainly not finished yet…….. 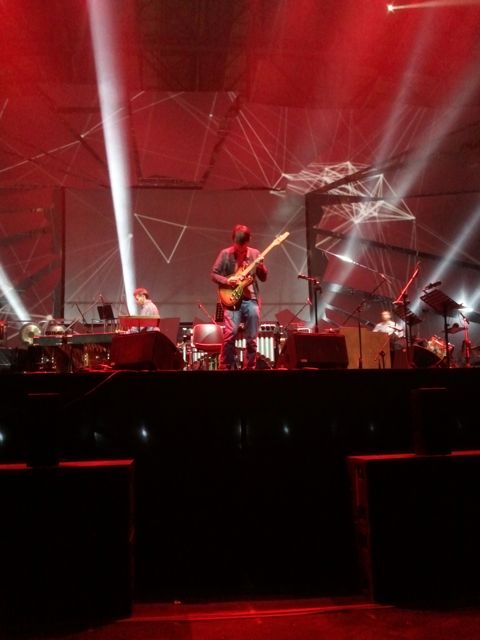 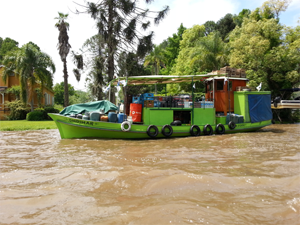 The Show Must Go On

on Never Too Late.