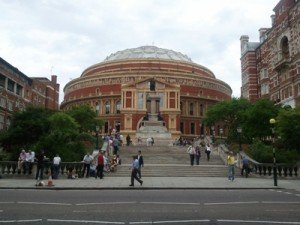 It was the concert day at last and I set off to London to sing with the John Wilson Orchestra, recreating the musical gems of Rogers and Hammerstein. When I arrived at the Royal Albert Hall for our short microphone test and rehearsal, there were already lots of people queuing for promenade tickets. For those of you who are not familiar with the set up of the BBC Proms concerts, there are many different ways to enjoy the music. You can listen live on radio 3 and sometimes watch the concerts on BBC4 – the really popular ones are featured on BBC2 (as was ours). You can enjoy it on the iPlayer for another week afterwards. If you want to be part of the excitement  of the live event, you can buy one of over 5000 tickets for the seats and private boxes in the Royal Albert Hall. Best of all – anybody can ‘promenade’. The stall seats are removed for the Proms and about 500 tickets can be bought on the day for only £5 cash – There is a choice of the arena, right in front of the stage, or the gallery, right up in the ‘God’s’. You have to be willing to stand all the way through and get there early to queue for the popular concerts. 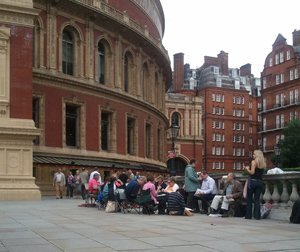 I learned from some of the public queuing outside, that serious music lovers can even buy a Promenade Season Ticket, making it even better value. These stalwarts come to many concerts during the season and make a real day of it. The picture shows them enjoying a bottle of wine and a picnic – they told me they had been there since 7am!

We had all been given security passes as we had rehearsed at the hall the day before, so I went straight in via the stage door. Christopher Dee, the Musical Director of the Maida Vale Singers, had asked the ladies to meet in the Green Room to run through a few notes. We were  featured in a couple of numbers, so we all wanted to get them just right.  The choir only had an hour of rehearsal with the orchestra before the show. As we only had 45 minutes to get our glad-rags on after the rehearsal, most of us had already started our hair and make up. Chris had given us the dress code of black, sparkly and as glamorous as possible – The lovely Emma had brought the whole vault of her crown jewels with her and I was quick to secure some ENORMOUS diamante earrings and a spectacularly sparkly necklace. 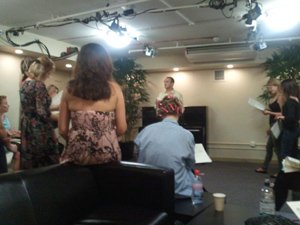 As you can see from this picture, the Green Room at the Albert Hall is not a very glamorous place. It’s has dingy lighting and a very low ceiling which makes a marked contrast to the opulence of the concert hall. You might also spot some hair curlers – we weren’t the only culprits. In the main rehearsal, Anna Jane Casey came onto stage with curlers and pyjama bottoms to sing I’m gonna wash that man right out of my hair – what a difference to the gorgeous creature who swept onstage later looking quite lovely in a long dress of pink satin.

She turned to the choir and orchestra and said “WHAT???” as we all laughed at her rehearsal outfit. 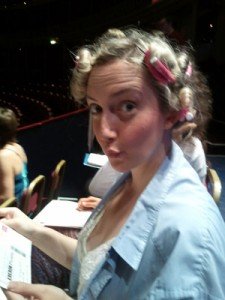 Sitting next to me for the Prom was Alex Young. It was her first time with the Maida Vale singers and her very first Prom concert, although she had previously played the piccolo in her youth orchestra at the Albert Hall. Alex told me that she had just finished a post graduate year in musical theatre at the Royal Academy of Music and was embarking on that very difficult and competitive life as an actress and singer. Here she is also pulling off the curlers with great aplomb!

John Wilson rehearsed us all to the maximum in the short time we had remaining, whilst still managing to make us laugh. He told the sax players, who had obviously retrieved their clarinets from the pawn shop, (see my previous blog entry) “those of you who are sight reading these new clarinet parts, count like hell and give that tune as much puff as you can!” At the end of the rehearsal, he thanked us all for our hard work and told us that he had watched some of the films that morning so he could be certain of getting the right tempo. He explained that the original film orchestra had given their life-blood. They had the luxury of many ‘takes’ to get it right for the soundtrack. We had only one chance to get each bar perfect and that ‘expensive’ sound would only came from maximum effort. John finished by pleading in his broad Geordie, “I want to see you sweating like dinner ladies!”

Many people in the UK were able to listen to the concert live and tonight (28/8/10) many will watch the concert on the television. I’m sure there will be another DVD of the concert as every review was glowing.

George Hall at The Guardian said: John Wilson’s conducting combined the neat address of a nice young doctor with a perfect bedside manner and the debonair flair of a matinee idol. He drew a fabulous quality of sound from his outstanding handpicked orchestra. read more

Edward Seckerson at The Independent said: It was as close as we get to being guests on the 20th Century Fox soundstages circa.1955. As the Main Title of Rodgers and Hammerstein’s Oklahoma! glided effortlessly into Oh, What a Beautiful Mornin’ and the John Wilson Orchestra’s burnished trumpets poured on their sun-kissed vibrato the sound, the style, the feel of how this music in these arrangements should go was right. Every sigh, every swoon, every refined inflection. It couldn’t have been righter. read more

Best of all for the choir, Ivan Hewett from the Telegraph said ‘Kim Criswell made our feet tap in June is Bustin’ out all Over! and any scruples I might have had about orientalism in South Pacific were soon swept away by her rendition of Bali Hai, though the angelic chorus of the Maida Vale Voices, floating on after the song ended, lent an extra magic. read more

Sadly, the choir didn’t have a great deal to do, but that meant that I could sit there with an enormous grin on my face enjoying the virtuosic playing. The soloists, Kim Creswell, Julian Ovenden, Anna Casey Jones, Sierra Boggess (currently starring in Andrew Lloyd Webber’s Phantom – Love Never Dies) and Rod Gilfry were all excellent. The biggest applause was saved for the wonderful orchestra and especially John Wilson. Here’s hoping I’ll have the privilege of singing with him again at next year’s proms. 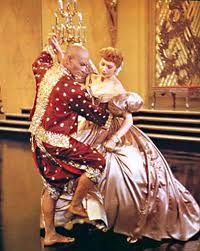 One final thought – my sister Nicola reminded me that my mother was a once a dancer in the original West End production of The King and I.

I was quite transported as the band swept effortlessly through the Overture to that well known musical, thinking about the strange circle of life.

If you enjoyed this blog entry, then you can sign up in the box above and you’ll get an email to let you know when I write again –  your email address is totally confidential.

I really value your comments too, so feel free to let me know your thoughts in the box below! 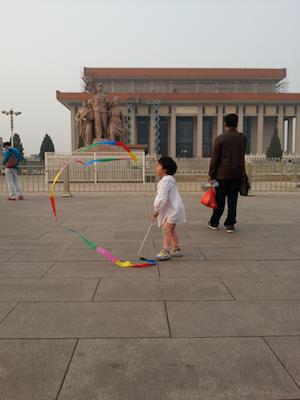 on Part Two – The John Wilson Orchestra | Recreating the musicals of Rogers and Hammersein at the BBC Proms.