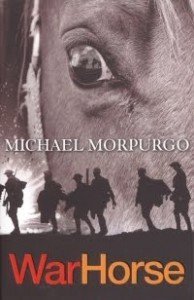 I was recently booked to record a guide-track for the new Spielberg film of Michael Morpurgo‘s Warhorse. His 1982 children’s novel had been successfully adapted as a play for the National Theatre to great critical acclaim, winning the Olivier, Evening Standard and the Critic’s Circle Awards. The show then transferred to the New London Theatre where it still plays to packed houses. The actors use lifesize bamboo puppets of horses which are quite extraordinary in their subtle movements. They were designed and built by puppet-master Adrian Kohler at the South African based company, Handspring Puppets. Here’s an interesting video I found which interviews cast and audience members at the National Theatre.

The new film of the book has become a personal ‘pet project’ for Stephen Spielberg who saw the play version in 2009 and fell in love with the story. The Director has previously made films aboutÂ  the Second World War but hadn’t worked on the First World War. He was recently spotted in London visiting the Imperial War Museum to do research.

Apparently the screenplay has been worked on by both Lee Hall, who adapted Billy Elliot for the stage, and Richard Curtis, who is currently working on a second draft. The International cast includes Emily Watson, Peter Mullan, David Thewlis and Benedict Cumberbatch (of Sherlock fame). Taking the lead though, is theÂ  young actor Jeremy Irvine in his film debut. He has already appeared at both the National Youth Theatre and the RSC.

the Independent Newspaper reports that Dreamworks and their distribution partner Disney hope to have the film in cinemas by autumn 2011, which means that War Horse will be released beforeÂ  Spielberg’s other current project â€“ a 3D animation of Tintin with Lord of the Rings director Peter Jackson.

Even the Queen is a fan and she loved the show so much that she invited the cast to perform with ‘Joey’ the Horse Puppet at this year’s Royal Windsor Horse Show. Here he is leading the Royal Household Cavalry in a Royal Salute.

Back to the job in hand (it’s so easy to get sidetracked when you start researching). I was booked by Terry Edwards for London Voices and we were told in an email that we were to record a guide-track that would be used during the filming. It would then be destroyed and not played on the final film. (Some of you might remember me writing about doing just that for the Nutcracker film, but on that occasion the guide-track was eventually used).

The session was at Angel studios and there were about 16 singers with Terry conducting. My old friend and first bass from the Swingle Singers, Ben Parry was producing in the Control Room, so it was great to catch up with him.

We were introduced to two Irish lads who were to join us on the session. They were brothers and it very quickly transpired that they were both really fun. They were called Eion and Moley and they were a singer-songwriting duo called size2shoes. Moley had been cast to sing on the film and was soon to go down to Devon to film on location. There were two tracks to do. One called ‘Only Remembered’ and another hymn. Terry asked us not to sing with a ‘trained’ voice sound but to sound like a congregation in a local Parish Church. As there wasn’t any music, he had sketched a quick outline for us to work from. Moley started the first verse unaccompanied and he had a beautiful clear voice and a lovely natural folk quality. We all piled in with our best Devon accents trying to sound as ‘villagey’ as we could. We recorded lots of different word combinations to give the film team a few options and our biggest challenge was to remember the different tense of verse and chorus. During the filming Moley would be joined by a local village choir as extras (or background artists). They would sing along to our guide track during the many ‘takes’ of filming. We hoped they wouldn’t be told we were professional singers, as we were doing our best to sing a bit out of tune and not start or finish together. 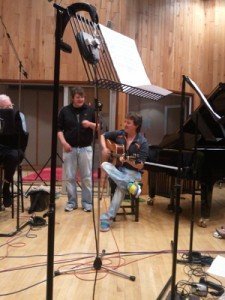 It was all done and dusted in about an hour and before we finished, Terry asked the lads to sing for us. Eion picked up his guitar and they sang one of their songs called ‘Take it Easy’. In the middle, Moley did some rapping, improvising some great lyrics about Terry. It was really funny and such a treat to hear them. If you click on the picture you can go to their website where there are some great videos and interviews.

Russell Crowe says of the group “Iâ€™m a huge fan of size2shoes. From the inspired mastery of their harmonies, to the streetwise intellect of their humours. Unique, unaffected, awesome.â€

It had been another really interesting session – being asked to sing with a Devon accent and sound like I’d never done any singing training before and then to hear an Irish Rapper for the first time. Fingers crossed that we get asked to record the final soundtrack music sometime next year!

Today I was interviewed by Ewing Stevens on radiolive.co.nz – and this came about because my blog post …

Cracking the code of the Christmas Nutcracker Film